This article is a brief outline of what I have developed and a result of request for more information. I hope it is at the right level of detail. If you want to know more please do not hesitate to get in contact and we can discuss it further.

Boating for me has been day sailing and lately interspersed with 2-3 day cruising. The level of instrumentation in the boats reflected this activity. However now I have stopped work I am looking to move more towards week long cruises hence the desire to extend my usage of boat instruments.

I then extended that setup to include:

My boat at the time was a Hunter Liberty 22 (Rubato). It had a 12v battery and a small generator from the outboard motor which was hardly on. So the current usage needed to be small and the battery last the season apart from overnight charges. This setup fitted that requirement.

I then changed boats and got the larger Baycruiser 26 (Bagpuss) from Swallow Yachts which came with (NMEA0183 devices):

More of an extension to the system used on Rubato. I would remove the GPS HAT from the raspberry pi but extend the Kindle to display Depth and send data to Navionics to display AIS.

In the future I would like to move to Android E-ink colour devices (E-ink is low powered and not affected by the Sun) for both instrumentation display as well as a chart plotter. This could also enable the usage of a smart watch solution.

In my limited experience the main reasons for a chart-plotter are:

I have not come to a conclusion what I will use but temporarily (as I have the equipment):

Opencpn can control an autopilot but for the moment I will track a route manually. I do have a remote control for the autopilot (seymonautica.com) which allows me the freedom to move around the boat and still adjust the autopilot. Much more useful than you would think especially when solo-sailing – such as when bringing in/laying out the mooring ropes and fenders. Note qtVLM is also very good.

The instrument system is based around a raspberry pi model 3B. It:

You will note the lack of STW so the data labels have been changed to Ground rather than True.

Here are the screens: 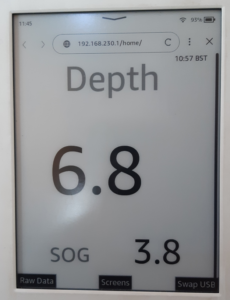 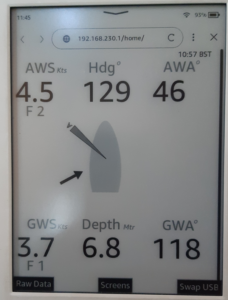 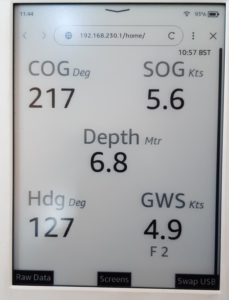 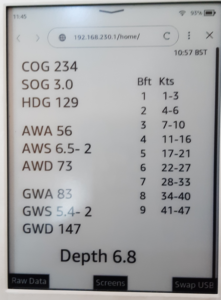 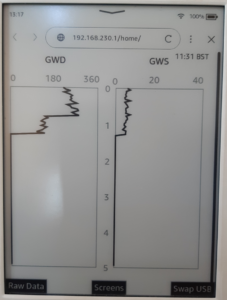 Note: the button Swap USB is no longer used as I use udev rules to determine the USB to TTY relationship and depth on each screen – I am paranoid about running aground.

I have divided this system into several layers – hardware, operating system and finally the software programs. The details below are pointers only, not the actual code. If you do want to build one please do get in touch – happy to provide advice and examples and maybe my image.

The sensors being NMEA0183 devices cannot be networked together and have been designed as point to point sensors (one sensor to one display). However all the sensors need to be combined together and fed to the raspberry pi. The existing solution is to use a multiplexor which can accept many NMEA0183 inputs , combine them into one output which then feeds the raspberry pi. 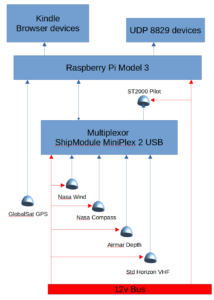 Each sensor is wired to the multiplexor which then sends the combined sentences to a USB port on the raspberry pi. The GPS system does not go through the multiplexor but goes to another USB port. The multiplexor ensures electrical isolation.

I have also added a power shim (HAT) to the raspberry pi. These single board computers are very temperamental when it comes to power so the shim takes a 12v feed and converts it to 5v rather than using an external convertor.

The raspberry pi then provides a UDP stream over WiFi to any device capable of receiving and deciphering the NMEA messages and via a separate programme a web service for browsers. The design is deliberate to ensure there is no delay in the transmission of data over the UDP port. There is nothing worse than seeing variation in the wind not being reflected in the displays.

I use a raspberry pi model 3B which has:

The advantage and disadvantage of PiCore is that it is very small with a minimum setup. You extend the operating system to suit what you require. Once you have worked out the modules you need, you load them and then save the new software onto the hard disk so they are there when you restart (filetool.sh -b).This also goes for any configuration changes and software that you add. Loading on reboot is automatic so .filetool.lst, onboot.lst need extending to include those extra files.

I have loaded modules:

The infrastructure is setup for internet access via a tethered connection as it comes by default but I do not intend to use it. The target is to provide a boat only hotspot for instrument data only.

The configuration files that will need changing:

It is best to copy ones than modify the templates so if needed I can provide these.

The security of the system reflects the lack of internet access and low powered hotspot. I have used one user – tc and one user – bagpuss for the WiFi. I have left ssh and scp ports open as they are the only method of access.

Linux by default assigns TTY ports in chronological order as they come on-line. This is a nightmare for programming as you do not know which TTY port you are using. Therefore Udev rules have been setup to correct this. In this installation I am using:

When the system turns on it runs startup files:

To test the system take an output of each serial input and check it has the NMEA0183 messages you expect. Run the USBtoUDP program and check the UDP port. Then run the Webserver program and see if you can see a webpage (192.168.230.1/home).

From the GPS you get through the serial port (sudo cat /dev/ttyUSB_GPS1):

From the Multiplexor you get through the serial port (sudo cat /dev/ttyUSB_M1) in no particular order (this is a subset):

I use the programming language Golang ( normally known as Go) to create the 2 programmes. The advantages of Go are:

My development environment is – Model 3B; NMEA0183 data taken from a real sail; windows desktop for development using visual studio and powershell. I use a linux laptop for cross compiling and use the linux laptop to transfer to the raspberry pi, test in house then on the boat.

The program takes 2 serial inputs and outputs the results over UDP/IP. The arguments state where to get the inputs from, where to put the output. In this installation the 2 serial inputs are ttyUSB_GPS1 & ttyUSB_M1. The output 192.168.230.255:8829. Please note the address ending in 255.This is important but beyond the scope of this article.

The program then opens each serial input and UDP output and then reads a line from the GPS input and then from the Multiplexor input ( if there is one there to read). There are simple error checks to ensure the NMEA sentences looks good and then it is written directly to the UDP output. The loop is continuous and has no wait times.

It has been designed to be small efficient and simple to avoid performance delays and reduce errors.

The Webserver reads from the UDP input and presents a webserver on port 80. It also sets the system time on the raspberry pi – from the GPS feed (there is no NTP server) and then creates the derived true wind data. The time is adjusted for GMT and BST but only for the UK.

The true wind data is calculated as follows (from openwind.de – I did contribute some software to them so feel I can use this):

The values are adjusted to reflect the boat heading when displaying graphically.

There is one web page where a division is updated every 3 seconds (via JavaScript). This stops the display having an annoying visible update. Use of 2 buttons (Data and Screens) allow the user to rotate between the different sailing screens or the data screens (which includes a graph). This is to reduce the number of screens you have to go through to get to the one you want. The graph shows a history of True wind direction and speed at 5 minute intervals for 5 hours.

A high level view of the program :