Advantages of a tiller tamer

If you are sailing short handed or solo, a tiller tamer of some sort is essential. With a properly set up tiller tamer and a correctly balanced sail plan, a boat can sail to windward by itself out in the open sea for long enough to have a drink, eat a snack or just admire the scenery.  Subject to certain conditions, it will also allow you to leave the tiller to make adjustments up forward.  Just don’t expect the boat to hold a completely steady course – as the wind shifts, so will the boat’s heading. And as the wind increases or drops, the boat will luff up or bear away, respectively.  But on average, it should move in the required direction, more or less.

There are several different makes of tiller tamer commercially available. They all rely on two common elements:

The better devices have two other elements:

It ought also be possible to have the tiller partially tamed, so that its position can be altered against a certain amount of resistance from the tamer. This sort of adjustment is useful when trying to set up a balanced course which will allow the tiller to stay untended for some time.

The best and most satisfying tiller tamer (but not necessarily the cheapest) is a home-made one, which combines the best functions of all the commercially available versions.  It is less prone to line chafe and when bits fail, which they inevitably do over time, it is very easy to mend.  The idea comes from a number of different sources, including several contributors to the SB forum.

You will need the following:

A home-made tiller tamer in action, showing most of the elements described above. Positioning the tiller tamer line and hardware so that it does not interfere with the rudder uphaul and downhaul requires a bit of judgement. A schematic diagram of the underside and port side of the tiller. Green = hardware; red = 4mm line; blue = 3mm line; black (attached to the stainless ring) = 1/8″ surgical tubing.

The surgical tubing shock absorber attached to the aft starboard horn cleat and through the snap hook to the 4mm line, the tautness of which can be adjusted with the guy rope adjuster

Tiller tamers in use

Probably the most frequent use of the tamer, whether shop-bought or home-made, will be to fix the tiller securely amidships. This could be when you are at anchor, when weathercocking into the wind (with or without the anchor out) with just the mizzen set or when motoring slowly into the wind with the mizzen set. Also when moored or on the trailer with the rudder raised.

The next most frequent use (and the most interesting) is fixing the tiller very slightly to leeward when on a long tack to windward. In an F3 and using mizzen trim to make final adjustments, the course steered should vary between 38 and 50 degrees apparent to the wind, depending on the wind’s strength. The harder the wind, the closer to windward you will sail. In theory, the boat could steer itself for hours like this in light winds. If you are using a version with shock absorption, the tiller will twitch through the waves as if it is being controlled by an electronic tiller pilot.

You may notice that the boat luffs up when you alter weight distribution by moving forward. If you are trying to make sail adjustments up forward and want to steer a steady course at the same time, this can be counteracted by pulling up the centreboard by around 75%. Don’t forget to drop it again when you have finished your adjustments.

The tiller can also be fixed hard-a-lee for when heaving to. In fact, that is the easy part of heaving to – the difficult part is making the boat stop in the water by adjusting the sails.

If you use the tiller tamer to fix a course when sailing solo and then fall overboard, the boat will sail serenely on without you. Without the tiller tamer, it would tend to luff up and stop more or less dead in the water, allowing you some chance of climbing back on board.

So the first rule when sailing solo with a tiller tamer must be “no heroics”.  Don’t clamber all over the foredeck with the tamer locked on unless you are wearing a life jacket and are hooked on with a harness.  Take everything more slowly and carefully than you normally would.  Additional convenience at the cost of significant extra risk is probably not a very good bargain. Remember that a lot of sail adjustments can also be made when hove to (if you can get it to work) or when weathercocking into the wind.  This means that in theory the boat ought not to move away from you as quickly if you are unfortunate enough to fall overboard.

Just to add to Graham’s excellent work. I have used a much simpler tiller tamer for three years, based on an idea from the Drascombe Association. The photo below just about shows it. 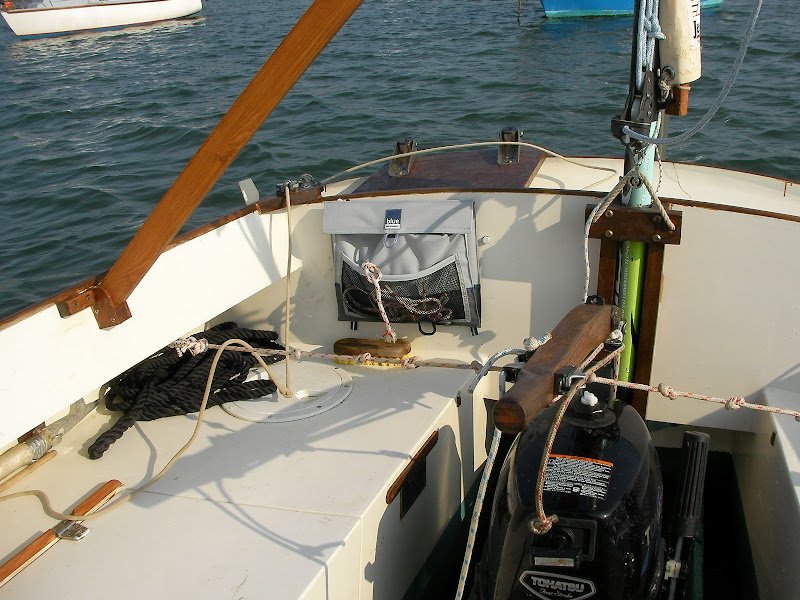 Tiller tamer knotted line in use underneath the tiller

The tamer consists of  single line running across the cockpit, underneath the tiller. The line has a number of closely spaced figure of eight knots, with two very close together at the centre of the line. Each end of the line finishes in a stainless steel hook which hooks onto a loop of shock cord under each side deck. Underneath the tiller there is a simple nylon horned cleat. That’s it. It takes a bit of setting up to get the length of line, the spacing of the knots and the position of the cleat right. The cleat needs to be far enough forward of the shock cord loops so that they will be pulled quite tight when the line is in use.

To use it, the tiller is pushed to the desired position, the knotted line is pulled forward and hooked up over the front of the cleat under the tiller, and the knots then stop the tiller moving. To disengage it, you just pull the line forward off the cleat and drop it, to hang loose below the tiller. You can remove the whole line simply by unhooking it. You need those two, closely spaced central knots to hold the tiller in the middle. I have sailed close hauled for nearly half an hour without touching the tiller. I use it all the time just to hold it for a moment whilst I pour a coffee or just sit back to enjoy the view. If I heave to, which I do a lot, I just shove the tiller down wind and snap on the line to hold it there. The Video below shows it working whilst I am filming. All of the filming was done with the tiller held by the knotted rope, as you can just see briefly near the middle:

Since writing this article and after Julian’s contribution above, I found an internet survey of every possible tiller tamer under the sun – all except Julian’s version, which deserves to be included. http://www.petersmall.co.uk/site/RIG%20TILLER%20LINES.htm#method